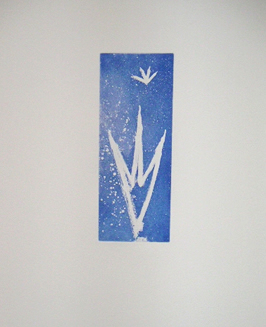 Flower, 1996 by Nicola De Maria is an original etching on wove paper that is signed and numbered out of an edition of 61.

Nicola De Maria is a contemporary Italian artist known for his playful abstractions painted in bright primary colors. Sometimes painted on multiple walls, De Maria’s large-scale compositions challenge the space in which the painting ends and the viewer’s space begins. “A true work of art should increase our vitality. And the door to succeeding in this intent is emotion, commotion,” the artist’s said of his work. “A work that does not evoke these feelings is useless, a failure.” Born on December 6, 1954 in Foglianise, Italy, De Maria was a founding member of the Neo-Expressionist Transavanguardia group during the late 1970s, which also included Sandro Chia, Enzo Cucchi, and Francesco Clemente. The artist has gone on to receive widespread acclaim and success, his work exhibited at three Venice Biennales as well as documenta 7 in Kassel. Today, De Maria lives and works in Sannio, Italy. His works are in the collections of the Castello di Rivoli Museo d’Arte Contemporanea in Turin and the Stedelijk Museum in Amsterdam.

Flower, 1996 by Nicola De Maria is an original etching on wove paper that is signed and numbered out of an edition of 61.

De Maria, who is best known for his room-size installations of painted walls, wood and other materials, will install a site-specific wall painting in the gallery, as well as a series of smaller paintings from the 1980’s entitled La testa allegra di un angelo bello.  The artist’s wall installation invites visitors to enter into a dream-like interior space in which vivid colors subtly reflect one another, while his smaller paintings emphasize his process through their carefully worked surfaces.  In both, De Maria’s emblematic use of color takes on a spiritual dimension, leading the viewer from an everyday reality into a more personal and aesthetic realm.

Nicola De Maria was born in Foglianise, Italy, December 6, 1954.  In 1977, De Maria created his first wall painting in Milan and followed this with a wall painting for the Paris Biennale that same year.  De Maria continued to transcend the confines of the canvas by imbuing the exhibition space with the art of color in the tradition of the old masters of Italian churches. In the 1980’s, De Maria exhibited space paintings at the Biennale of Venice, Documenta 7 Kassel, XVI Biennale of San Paolo, Sydney Biennale and the Quadriennale di Roma.  In 1981, he was included in both “Identité Italienne”, a group exhibition at the Centre Pompidou in Paris, and “Critics and Art” at the National Gallery of Rome.  Retrospectives of his paintings and drawings quickly followed at Museum Haus Lange, Krefeld and Kunsthalle Basel in 1983; Van Abbemuseum Einhoven and Kunsthaus, Zürich in 1985; Kunstmuseum, Bonn in 1986 and the Seibu Museum of Modern Art, Tokyo in 1988.  In 1990, De Maria designed the entrance room at the XLIV Biennale of Venice and also exhibited at the Musée des Beaux Arts, Nîmes.  In 1992, De Maria was commissioned to design a fresco painting for the German Parliament at Bonn.

Throughout the 1980s, De Maria’s work was featured by Achille Bonito Oliva in multiple Transavanguardia group exhibitions.  Although De Maria was originally shown in this context, he separated himself early on by developing a body of work that is largely non-figurative and often small scale.  Today, Nicola De Maria continues to work and live in Torino, Italy.  Nineteen monographic publications, mostly designed by the artist himself, show his painted world. 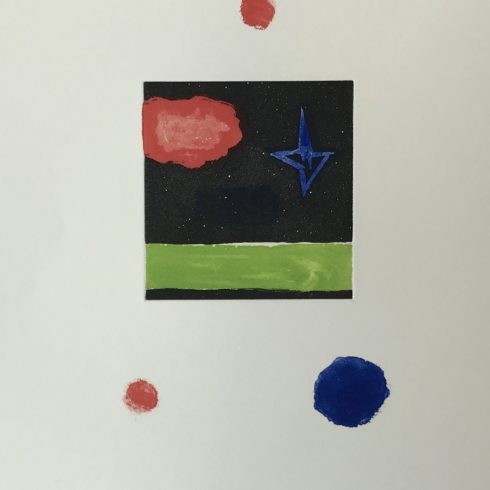