Robert Graham was a Mexican sculptor, best known for his large-scale public works and female nudes. His many sculptures of women were specific and personal, each one documenting a particular woman in a particular pose. His work is included in the collections of several museums, including the Los Angeles County Museum of Art, the Whitney Museum of American Art in New York, and the Hirshhorn Museum and Sculpture Garden in Washington, D.C.

Our Fine Art Gallery has the finest quality Robert Graham bronze, sculptures, figures, torso, and maquettes. We have a large inventory available off-site and we encourage you to make an appointment to see specific works you are looking to collect. We are happy to meet you at either our art gallery showroom or at your home or office for a private presentation.

It was not long before Robert Graham’s concentration on the nude, and an exceptional talent for making moulds persuaded him to abandon narrative to explore variations on a single body cast in bronze. Robert Graham began to make bronze statues in which Graham represented the female nude both partially and whole, mobile and static, and painted or patinated.

Robert Graham’s first major monumental sculpture commission was the ceremonial gateway for the Los Angeles Memorial Coliseum, for the occasion of the 1984 Olympics. Robert Graham also designed the commemorative silver dollar for the event. Robert Graham’s most famous bronze monument, The Olympic Gateway features two bronze-cast torsos, male and female, modeled on contestants in the games. To the surprise of many, the nudity of the bronze torsos became an issue in the media.

It was a logical progression for sculptor Robert Graham to continue to create public monuments, assured by the success of the 1984 Olympic Gateway. Among Robert Graham’s other notable public monuments and commemorations, all cast in bronze, are the Joe Louis Memorial in Detroit (1986), the Franklin Delano Roosevelt Memorial in Washington DC (1997), the Duke Ellington Memorial in New York (1997), and the Charlie “Bird” Parker Memorial in Kansas City (1999).

Some of Robert Graham’s most notable public and private sculptural achievements include: Dance Door at the Los Angeles Music Center (1978), the Four Crocker Fountains in the Wells Fargo Center Plaza, Los Angeles (1983), and Torso created for Rodeo Drive and the city of Beverly Hills (2003). 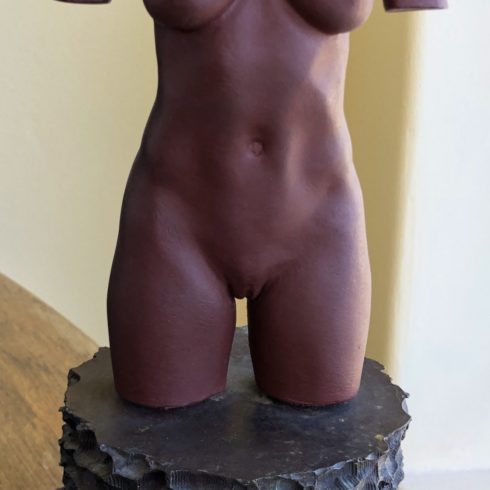