Best known for his paintings of cakes, pies, pastries, and toys, Wayne Thiebaud hadn’t planned on becoming a visual artist. He apprenticed as a cartoonist at Walt Disney studios and intended to work as a commercial illustrator, but his friend Robert Mallary turned him towards a career in fine art.

Our fine art gallery has the finest quality Wayne Thiebaud original prints, etching, aquatints, woodcuts, cityscapes, landscapes, desserts, and signed artworks. We have a large inventory available off-site and we encourage you to make an appointment to see specific works you are looking to collect. We are happy to meet you at either our art gallery showroom or at your home or office for a private presentation.

Wayne Thiebaud was born November 15, 1920 in Mesa, Arizona. His family moved to Long Beach, CA when he was six months old. During high school, Thiebaud apprenticed for a summer at the Walt Disney Studio and then continued his artistic education at Los Angeles trade school. He earned a degree from Sacramento State College in 1941 and worked as a cartoonist, designer and served as an artist in the United States Army Air Force.

In 1950, at the age of thirty, he enrolled in Sacramento State where he earned a Master’s Degree in 1952 and began teaching at Sacramento City College. In 1960, he became assistant professor at the University of California, Davis, where he remained through the 1970s and influenced numerous students. However, he did not have much following among Conceptualists because of his adherence to basically traditional disciplines, emphasis on hard work as a supplement to creativity, and love of realism.

On a leave of absence, he spent time in New York City where he became friends with Willem De Kooning and Franz Kline and was influenced by these abstractionists as well as proto pop artists Robert Rauschenberg and Jasper Johns. During this time, he began a series of very small paintings based on images of food displayed in windows where he focused on their basic geometric shapes.

In 1960 he had his first one-man shows in San Francisco and in New York City. These shows received little notice, but two years later, a 1962 Sidney Janis Gallery exhibition in New York officially launched Pop Art, bringing Thiebaud national recognition although he disclaimed being anything other than a painter of illusionistic form.

In 1962 Thiebaud’s work was included, along with Roy Lichtenstein, Andy Warhol, Jim Dine, Edward Ruscha, and others, in the ground-breaking “New Painting of Common Objects,” curated by Walter Hopps at the Pasadena Art Museum. This exhibition is historically important as one of the first Pop Art exhibitions in America.

He was associated with the Pop Art painters because of his interest in objects of mass culture, however, his works, executed during the 1950s-1960s, slightly predate the works of the classic pop artists, suggesting that Thiebaud may have had an influence on the movement. Thiebaud uses heavy pigment and exaggerated colors to depict his subjects, and the well-defined shadows characteristic of advertisements are almost always included in his work.

In addition to food and consumer goods, Thiebaud has painted landscapes, streetscapes, and popular characters such as Mickey Mouse. His works are noted for their hyper realism, and are in some ways similar to Edward Hopper’s work, who was fascinated with mundane scenes from everyday American life. In 1964 he made his first prints at Crown Point Press, and has continued to make prints throughout his career. In 1967 his work was shown at the Venice Biennale Internationale. 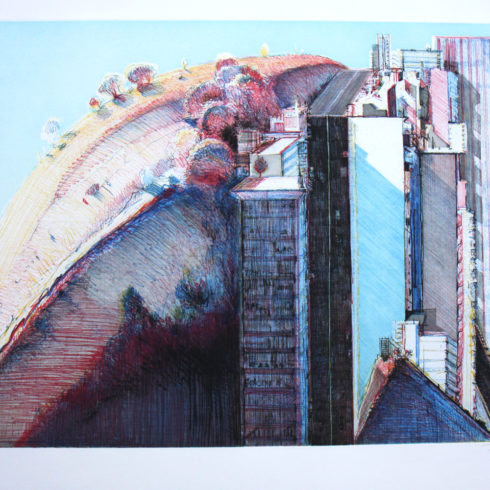