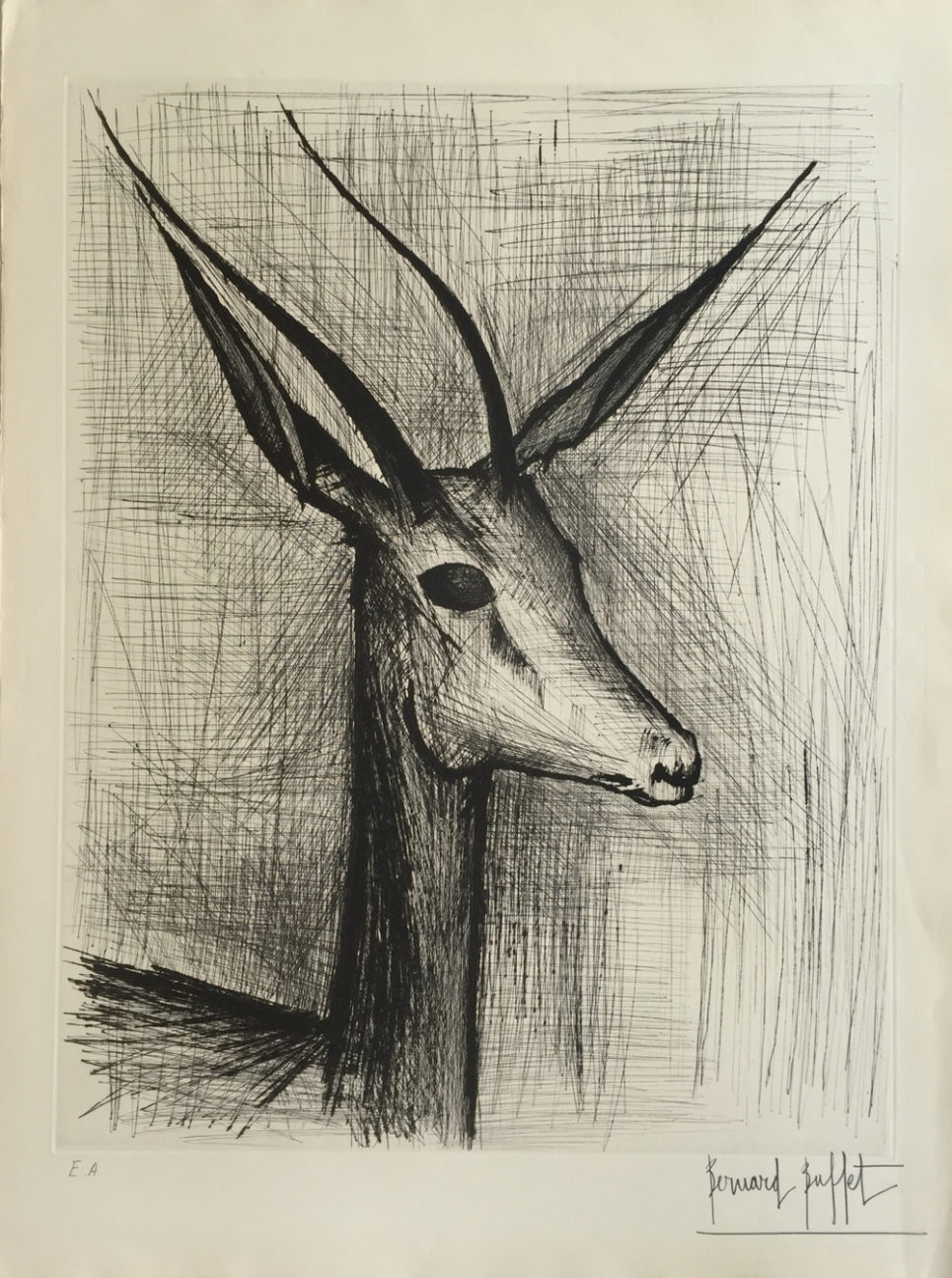 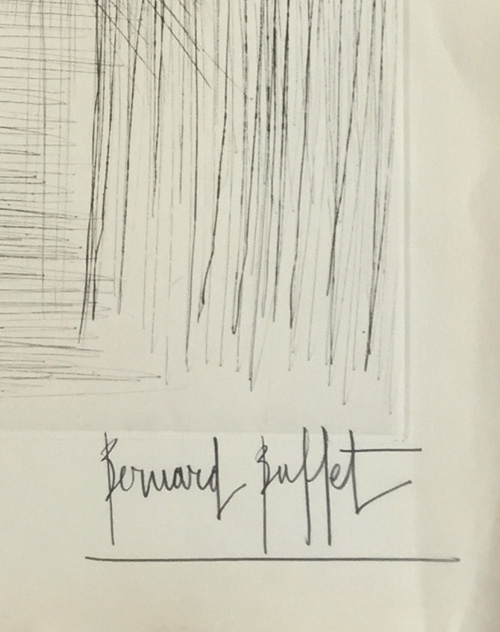 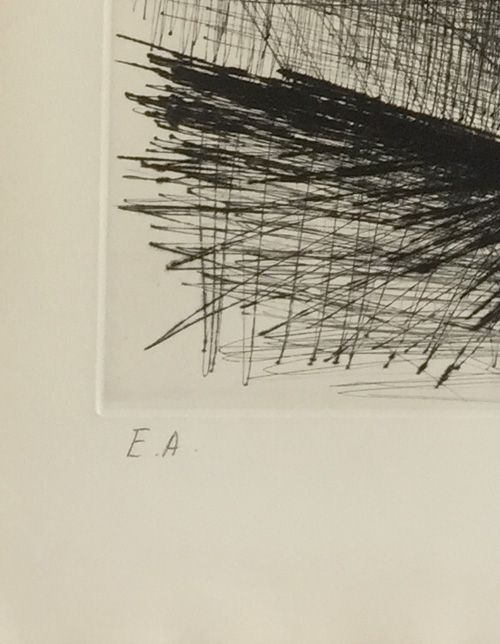 “E.A.” stands for Epreuve d’Artiste or “Artist Proof”. Artist proofs are a small portion of printed impressions aside from the regular edition. The artists proofs are printed in a small number between 5 and 25 and can also be numbered and described in the catalogue raisonné.

The style of Bernard Buffet is defined by “dry” straight lines revealing the shape of buildings and bodies. His works show elongated, emaciated figures and structures and lend a feeling of despair and loneliness.

While Gazelle is not necessarily considered “pretty”, the desire for a modern ideal created the need for his stark and somber images expressing intense emotion. Buffet’s style focuses on older, more conservative statues of art, such as drawing, while playing on the continuous popularity of Existentialism. Buffet’s figures are long, desolate, and solitary, yet at the same time empathetic; and they resonate with the public and critics alike.

“E.A.” stands for Epreuve d’Artiste or “Artist Proof”. Artist proofs are a small portion of printed impressions aside from the regular edition. The artists proofs are printed in a small number between 5 and 25 and can also be numbered and described in the catalogue raisonné.

Bernard Buffet was a French Expressionist painter. Best known for his representational work, Buffet’s paintings are often figurative, graphic, and central in their compositions. A bold rejecter of abstract art altogether, Buffet was a member of the anti-abstraction group L’homme Témoin, or the Witness-Man, which passionately argued for the importance of representational art at a time when abstraction began to dominate the critical conversation. His oeuvre revolved around ideas of art history, death, sexuality, popular culture, and politics while often directly referencing contemporary events and artists. Buffet had an extremely prolific career, painting over 8,000 works and garnering widespread popularity and acclaim, including dozens of international exhibitions and honors such as being inducted into the Académie des Beaux-Arts in 1974. Born in Paris, France on July 10, 1928, the artist took his own life after a prolonged battle with Parkinson’s disease on October 4, 1999 in Tourtour, France at the age of 71.

The artist’s first painting was exhibited in 1946 at the Galerie Beaux-Arts in Paris, France. After that, Buffet held at least one exhibition in each of the subsequent years. The French magazine Connaissance des arts named him number one in a list of the 10 best Post-War artists. The first retrospective of Buffet’s work was held in 1958 at the Galerie Charpentier in Paris. In 1973, the Bernard Buffet Museum was inaugurated in the artist’s honor in Surugadaira, Japan. Five years later, in 1978, Buffet was commissioned by the French government to design a stamp depicting the Institut et le Pont des Arts. Examples of his paintings include Tête de Veau (1954), Bouquet(1965), and Still Life (1991). 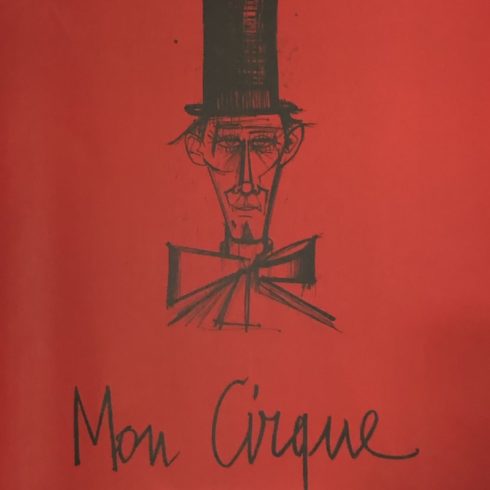 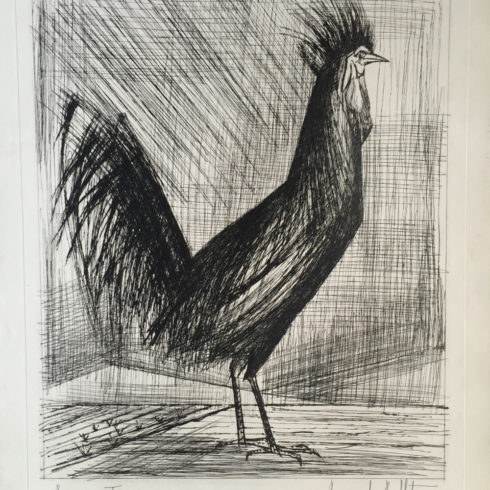 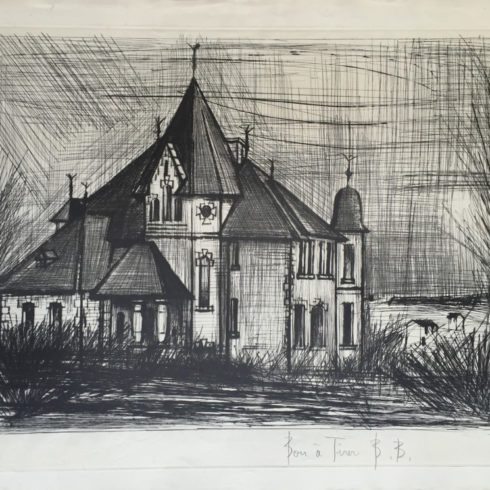 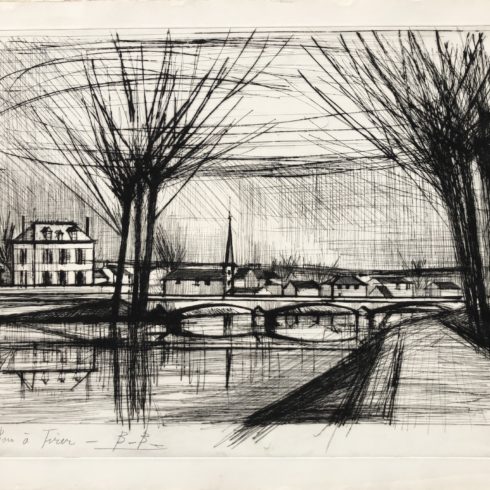 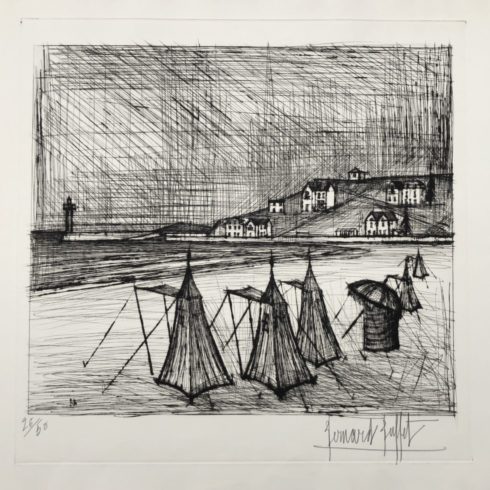