Niki de Saint Phalle was a French-American sculptor, painter, and filmmaker. She was one of the few women artists widely known for monumental sculpture. Niki de Saint Phalle paired bold, jubilant, and cartoonish feminine forms with dark and disturbing material in her multifaceted artistic career. Throughout, she continually disrupted long-held conventions in art, and her iconoclastic approach to her identity and society at large made her an early and important voice to both the feminist movement and the development of early conceptual art.

Our Fine Art Gallery has the finest quality Niki de Saint original prints, lithographs, serigraphs, sculptures, and posters. We have a large inventory available off-site and we encourage you to make an appointment to see specific works you are looking to collect. We are happy to meet you at either our art gallery showroom or at your home or office for a private presentation.

French painter, sculptor, graphic artist and film-maker, Niki de Saint Phalle was one of the great entertainers of Modern Art. Born near Paris, France as Catherine Marie-Agnes Fal de Saint Phalle on October 29, 1930 to a French father and an American mother, she was raised in New York City where the family moved in 1933 after being financially wiped out during the stock exchange collapse

Niki, as she was preferred to be known, was expelled from a convent school for painting the fig leaves on the school statues bright red. Her headmistress suggested that the young girl either leave school or get psychiatric treatment. She then attended public schools and graduated in 1947 having immersed herself in the works of Edgar Allan Poe, Shakespeare, Greek tragedies and also wrote her first plays and poems.

In 1948-49 she worked as a fashion model and appeared in Vogue Magazine, Harper’s Bazaar, Elle and graced the cover of Life Magazine. Then 18, she eloped with Harry Matthews, a young US Marine. At the behest of their parents, the young couple eventually married in the church and then settled in Cambridge, MA where Niki produced her first oils and gouaches. In April 1951, their daughter, Laura, is born.

Niki, Harry and Laura left the States and moved to Paris in 1952 where Harry Matthews followed his dreams of becoming a music conductor while Niki studied drama. The family spent the summer months in the South of France, Spain and Italy where they frequented museums and cathedrals. Niki was impressed by the idea that a cathedral is the result of a ‘collective ideal’—this thought would impact her art later on.

After suffering a nervous breakdown, Niki gave up acting and decided to become a full time artist. She is introduced to American painter Hugh Weiss who would tutor her for five years and encouraged her to retain her self-taught style. In 1954 the family moved to Mallorca, Spain where Niki discovered the works of Antonio Gaudi. She was captivated by Park Güell—Gaudi’s sculpture garden and aspired to create a garden of her own one day.

In Paris, Niki and Harry often visited the Louvre and other museums where she discovered the work of Paul Klee, Henri Matisse, Pablo Picasso and Henri Rousseau. Niki met artist Jean Tinguely and his wife in 1956 in what would become a lifelong collaborative relationship. She began her first sculptures, assisted by Tinguely, and was introduced to works by American artists Robert Rauschenberg, Jasper Johns, Willem de Kooning and Jackson Pollack.

After separating from her husband, Niki moved in with the now divorced Tinguely at the end of 1960 and continued her artistic experiments in assemblages and target pictures. She organized ‘shootings’ in 1961-1963 where her canvasses were incorporated with exploding paint containers, which she shot to splatter their contents, before a crowd of Avant Garde supporters. The resulting canvases were known as ‘shooting paintings.’ As part of the celebrations honoring Surrealist artist Salvador Dali, Niki and Tinguely created a life size bull made of plaster & paper which exploded during the fireworks display.

In October 1961 she took part in ‘The Art of Assemblage’ exhibition at The Museum of Modern Art in New York. Between June-September of that year, more than 50 international magazines carried reports on Niki de Saint Phalle’s artworks. She received several worldwide art commissions, including the massive sculpture ‘Hon’ (Swedish for ‘she’) at the Stockholm Modern Art Museum. Visitors entered the walk-in sculpture through the vagina of a 28 meter long reclining woman. Once inside, visitors could, among other things, get milk from a bar in one of the breasts and watch Greta Garbo movies.

At the suggestion of her gallery agent Alexandre Iolas, Niki created her first graphic prints in 1965. She incorporated her ‘Nanas’—voluptuous archetypal female figures inspired by a friend’s pregnant form along with fantastical imagery of snakes, moons, flowers, mythical figures and animals into her graphic works. Niki and Jean Tinguely married in 1971 and the couple worked from their home—an old country inn outside of Paris. They would separate two years later but remained good friends and collaborators.

Niki’s dream of a sculpture garden came to fruition as a friend donated land in Tuscany. The garden, called ‘Giardino dei Tarocchi’, contains massive sculptures of the symbols found on Tarot cards, is begun in 1979 and takes more than twenty years to complete. It is largely funded by the sale of Niki’s perfume line.

For health reasons, in 1994, Niki moved to La Jolla, California, where she lived for next eight years. She established a studio where she worked with mirrors, glass, and stones, which she is increasingly used in her sculptures instead of paint. ‘Queen Califia’s Magical Circle Sculpture Garden’ is begun in Escondido, California in 2000. She drew much of its imagery from her interpretations of early California history, myth, and legend, Native Americans & Meso-American culture, and the study of indigenous plant and wildlife. That year Niki was awarded the 12th Praemium Imperial Prize in Japan, considered to be the equivalent to the Nobel Prize in the art world.

Niki de Saint Phalle died on May 21, 2002 at the age of 71 in La Jolla, CA. Her granddaughter, Bloum Cardenas, now oversees Niki’s works in progress and established The Niki Charitable Art Foundation, a nonprofit established to promote and protect Niki’s artistic legacy.

QUOTE:
Life…is never the way one imagines it. It surprises you, it amazes you, and it makes you laugh or cry when you don’t expect it.” 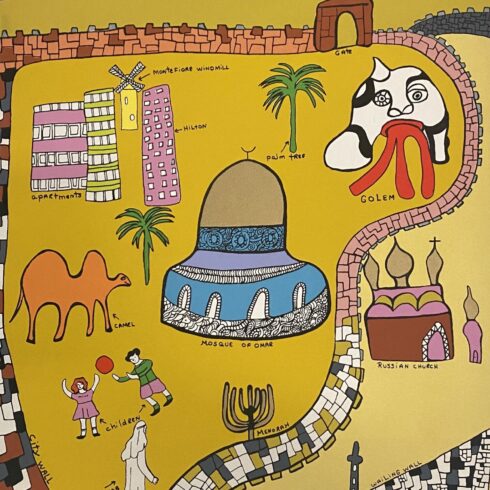 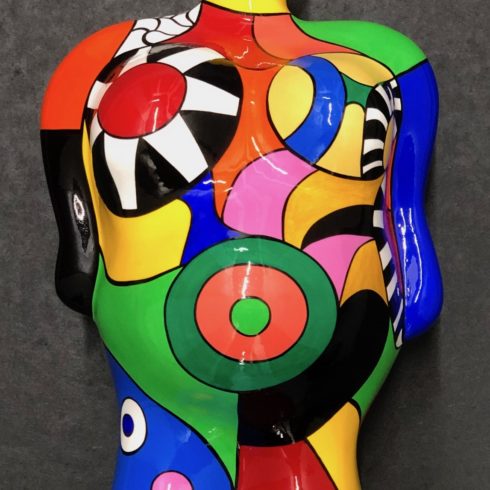 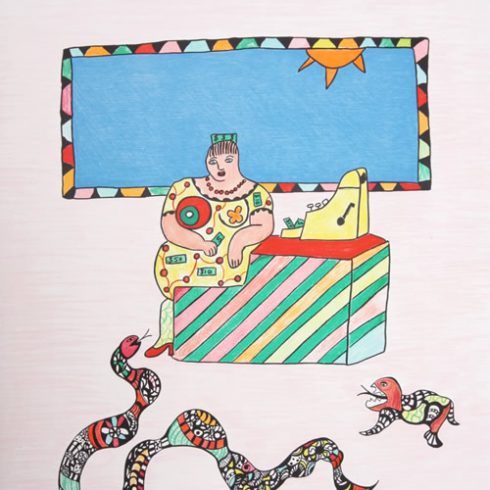 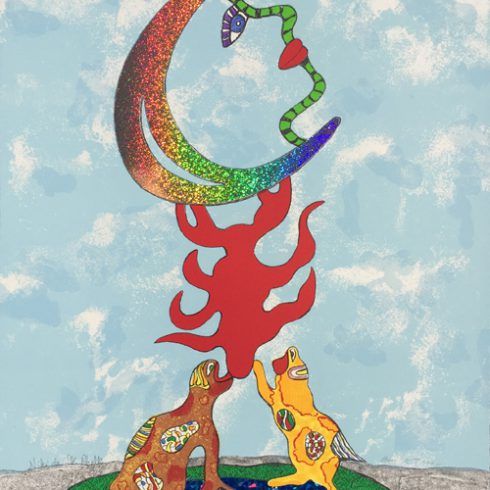 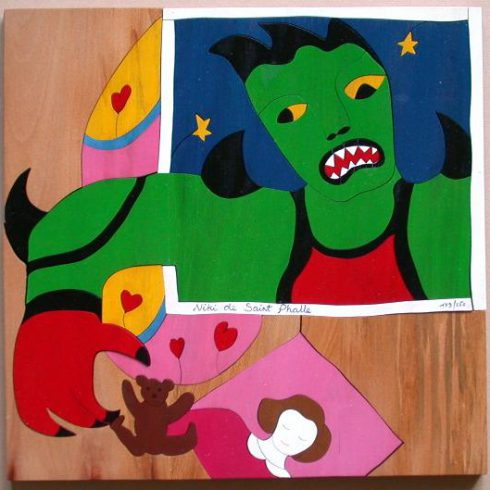 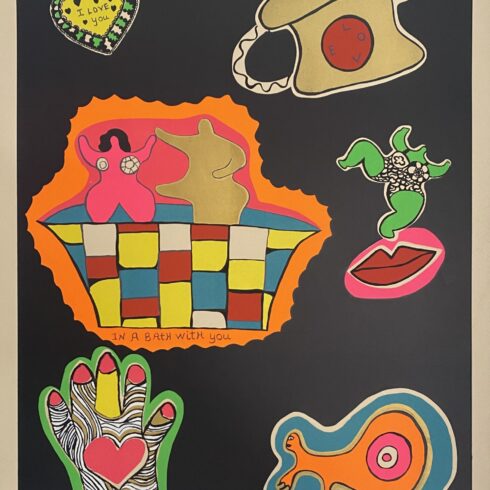 Niki de Saint Phalle – In a bath with you 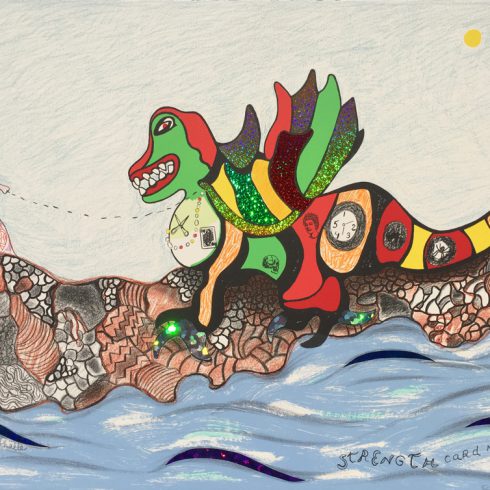 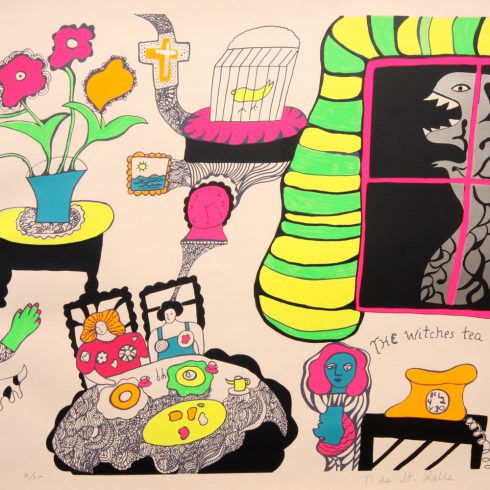