David Hockney is one of the most influential British artists of the 20th century. He is perhaps best known for his serial paintings of swimming pools, portraits of friends, and verdant landscapes. The artist’s oeuvre ranges from collaged photography and opera posters to Cubist-inspired abstractions and pleine-air paintings of the English countryside.

David Hockney is a painter, draughtsman, printmaker, stage designer, and photographer. An important contributor to the pop art movement of the 1960s.

In 1973 David Hockney went to live in Paris, where Hockney took the opportunity to work with Aldo and Piero Crommelynck, who had been Picasso’s master printers, and produced a series of etchings in memory of Picasso who had died earlier that year. Hockney had been inspired by Picasso’s art since Hockney saw the Picasso exhibition at the Tate Gallery in the summer of 1960. In 1974 David Hockney had a large art exhibition of at the Musee des Arts Decoratifs in Paris.

Our Fine Art Gallery has the finest quality of David Hockney original prints, lithographs, screenprints, and posters. We have a large inventory available off-site and we encourage you to make an appointment to see specific works you are looking to collect. We are happy to meet you at either our art gallery showroom or at your home or office for a private presentation.

David Hockney has always denied being a Pop Artist but is included under this heading because this is how the public perceives Hockney. The most highly publicized British artist since the Second World War, David Hockney was born in Bradford in 1937, the fourth of five children. By the time David Hockney won a scholarship to Bradford Grammar School at the age of eleven, Hockney had already decided that he wanted to pursue art. David Hockney drew art for the school magazine and produced art posters for the school debating society as a substitute for homework. At sixteen David Hockney persuaded his parents to let him go to the local art school, and this was followed by two years of working in hospitals as an alternative to National Service, as Hockney had registered as a conscientious objector.

In 1959 David Hockney went to the Royal College of Art in London to continue his art studies: “Immediately after I started at the Royal College I realized that there were two groups of students there: a traditional group, who carried on as they had done in art school, doing still life, life painting and figure compositions; and then what I thought of as the more adventurous, lively students, the brightest ones, who were involved in the art of their time. They were doing big Abstract Expressionist paintings on hardboard.”

David Hockney duly tried abstraction but found it too sterile. During this time Hockney was in a phase of rapid self-discovery on both artistic and personal levels. David Hockney was coming to terms with his own sexuality while at the same time searching for an artistic style. Since figure-painting seemed ‘anti-modern’ David Hockney began by including words in his art as a way of humanizing them, but these were soon joined by figures painted in a deliberately rough and rudimentary style which owed a great deal to artist Jean Dubuffet. In 1961, while still a student at the Royal College of Art, David Hockney was featured in the exhibition Young Contemporaries—alongside artist Peter Blake—that announced the arrival of British Pop Art. This show marked the public emergence of a new Pop movement in Britain, with Hockney considered one of its leaders.

In the same year, David Hockney made a series of discoveries. Hockney visited New York, where Hockney met artists, Andy Warhol and Dennis Hopper. David Hockney was struck by the freedom of American society, and Hockney bleached his hair and began to present a new image of himself. David Hockney was not only influenced by his trip to the United States, but also by the poetry of Walt Whitman. David Hockney had begun to make etchings, and on Hockney’s return to England set to work on a series of prints which reflected his American experiences. David Hockney also visited Italy for the first time in December 1961 and Berlin in 1962.

Hockney’s success was so rapid that Hockney became independent soon after leaving the Royal College of Art, and from 1963, David Hockney was represented by the influential art dealer John Kasmin. In 1963 David Hockney traveled to Egypt at the invitation of the London Sunday Times, and then at the end of the year, Hockney went to Los Angeles, where David Hockney would live for a number of years. Hockney had always fantasized about living in Los Angeles: “Within a week of arriving there in this strange big city, not knowing a soul, I’d passed the driving test, bought a car, driven to Las Vegas and won some money, got myself a studio, started painting, all within a week. And I thought it’s just how I imagined it would be.”

David Hockney was taken by the Los Angeles lifestyle and landscape, and these themes would become important features in the art of Hockney. David Hockney was inspired to make a series of swimming pools in Los Angeles, and in 1967, Hockney’s art piece, Peter Getting Out Of Nick’s Pool, won the John Moores Painting Prize at the Walker Art Gallery in Liverpool. At this time David Hockney started using acrylics rather than oil paint and Hockney made increasing use of photography for purposes of documentation. David Hockney also made prints, portraits of friends, and stage designs for the Royal Court Theatre, Glyndebourne, La Scala and the Metropolitan Opera in New York City. In 1970 David Hockney had his first major retrospective art exhibition, at the Whitechapel Art Gallery in London.

During the 1970’s David Hockney also experimented both with large composite photographs and with works made of paper pulp impregnated with color – the Paper Pools. From 1982 David Hockney explored the use of the camera, making composite images of Polaroid photographs arranged in a rectangular grid. Later Hockney used regular 35-millimeter prints to create photo-collages, compiling a ‘complete’ picture from a series of individually photographed details.

After working with California master printer Ken Tyler in the 1980s making etchings and lithographs, David Hockney explored ways of creating art with color photocopiers in 1986. “The works I did with the copying machine …were not reproductions,” Hockney said later, “they were very complex prints.” Subject to the same curiosity about new technical methods, David Hockney began to experiment with the fax machine, and in 1989 sent work for the Sao Paulo Biennale to Brazil via fax. David Hockney began experiments using computers, composing images and colors on the screen and having them printed directly from the computer disk without preliminary proofing. David Hockney has had major retrospectives of his art in New York, Los Angeles and London. Technical experimentation has continued to inform and develop the art of David Hockney.

In 2008, David Hockney called on Britain’s most celebrated artists to donate their art to the Tate Modern saying that it was the duty of artists to give something back to an institution whose support had ensured that they do not struggle in their early years. David Hockney primarily works in his art studio in the Hollywood Hills near Los Angeles, California, where Hockney has lived permanently since 1978.

“The mind is the limit. As long as the mind can envision the fact that you can do something, you can do it, as long as you really believe 100 percent.” – David Hockney 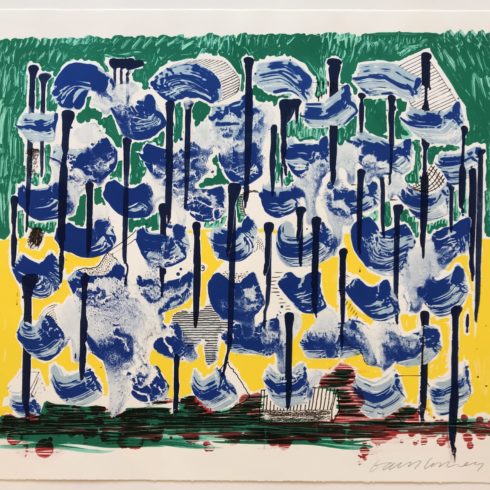 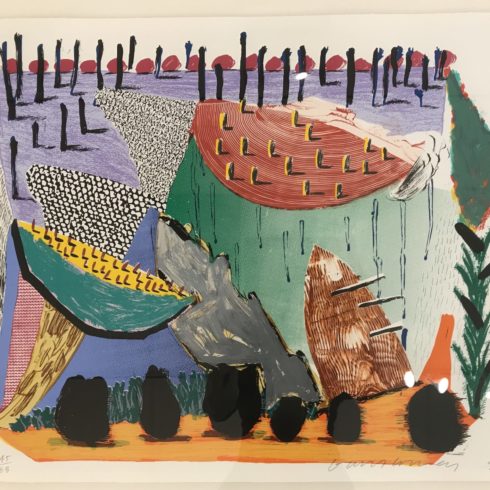 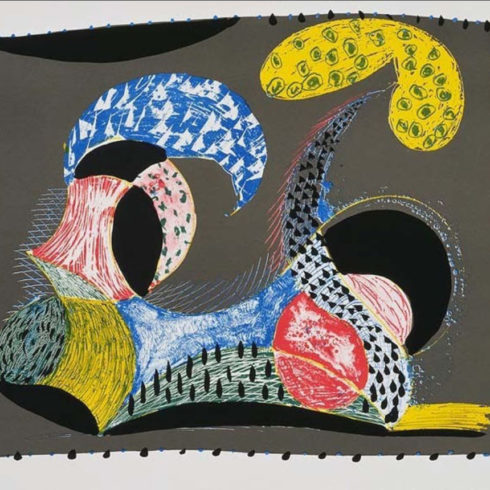