Ellsworth Kelly has been a widely influential force in the post-war art world. He first rose to critical acclaim in the 1950s with his bright, multi-paneled and largely monochromatic canvases. Maintaining a persistent focus on the dynamic relationships between shape, form, and color, Kelly was one of the first artists to create irregularly shaped canvases. During the 1950s, Calder traveled throughout France, where he met Constantin Brancusi, Alexander Calder, and Francis Picabia among other artists. In France, he discovered Romanesque art and architecture and Byzantine art. Kelly was also introduced to Surrealism and Neo-Plasticism, which led him to experiment with automatic drawing and geometric abstraction.

Our Fine Art Gallery has the finest quality Ellsworth Kelly original prints and lithographs. We have a large inventory available off-site and we encourage you to make an appointment to see specific works you are looking to collect. We are happy to meet you at either our art gallery showroom or at your home or office for a private presentation.

American painter, sculptor and printmaker, Ellsworth Kelly was born May 31, 1923, in Newburgh, New York. Throughout his career, he crossed the traditional boundaries between painting, sculpture and architecture. Kelly studied at Pratt Institute, Brooklyn, from 1941 to 1943, and after three years of military service, he attended the School of the Museum of Fine Arts, Boston, from 1946 to 1947. The following year, Kelly went to France and enrolled at the Ecole des Beaux-Arts in Paris under the G.I. Bill, although he attended classes infrequently.

Kelly was one of the major practitioners of abstract art in the US after World War II and as early as the 1950s, he developed an individual approach that influenced the course of Minimal art, color field painting, hard-edge painting and Post-painterly Abstraction without becoming fully a part of any of these movements. He abstracts the forms in his artworks from observations of the real world, such as shadows cast by trees or the spaces between architectural elements.

In 1950, Kelly met Jean Arp and that same year began to make shaped-wood reliefs and collages in which elements were arranged according to the laws of chance. He soon began to make paintings in separate panels that can be recombined to produce alternate compositions, as well as multi-panel paintings in which each canvas is painted a single color.

During the 1950s, he traveled throughout France, where he met Constantin Brancusi, Alexander Calder and Francis Picabia among other artists. His first solo show took place at the Galerie Arnaud, Paris, in 1951. Kelly returned to the United States in 1954, living first in a studio apartment on Broad Street, and then at Coenties Slip in lower Manhattan, where his neighbors would through the years include Robert Indiana, Agnes Martin, James Rosenquist, Lenore Tawney, and Jack Youngerman.

Kelly continued to develop and expand the vocabulary of painting, exploring issues of form and ground with his flatly painted canvases. During a span of ten years, his rounded, organic forms became sharp rectangles and his originally gestural style gained clarity with a more architectural approach. Kelly then created wall-mounted installations consisting of multiple monochrome panels that could be seen both as sculptures and as paintings.

His first solo show in New York was held at the Betty Parsons Gallery in 1956, and three years later he was included in ‘Sixteen Americans’ exhibition at the Museum of Modern Art, New York. In 1958, he also began to make freestanding sculptures. He moved out of Manhattan in 1970 to set up a studio in Chatham with a home in nearby Spencertown, New York.

Kelly’s first retrospective was held at the Museum of Modern Art, New York, in 1973. The following year, Kelly began an ongoing series of totemic sculptures in steel and aluminum. He traveled throughout Spain, Italy, and France in 1977, when his work was included in ‘Documenta’ in Kassel. He has executed many public commissions, including a 1969 mural for UNESCO in Paris, a 1978 sculpture for the city of Barcelona, and a 1993 memorial for the United States Holocaust Memorial Museum in Washington, D.C.

Kelly’s extensive work has been recognized in numerous retrospective exhibitions, including a 1982 sculpture exhibition at the Whitney Museum of American Art, New York; a 1987-88 exhibition of works on paper and a show of his graphic prints that traveled extensively in the United States and Canada; and a 1996 career retrospective organized by the Guggenheim Museum, New York, which traveled to the Museum of Contemporary Art, Los Angeles; the Tate Gallery, London; and the Haus der Kunst, Munich.

QUOTE:
“I have worked to free shape from it’s ground, and then to work the shape so that it has a definite relationship to the space around it; so that it has a clarity and a measure within itself of its parts (angles, curves, edges and mass); and so that, with color and tonality, the shape finds its own space and always demands its freedom and separateness.” 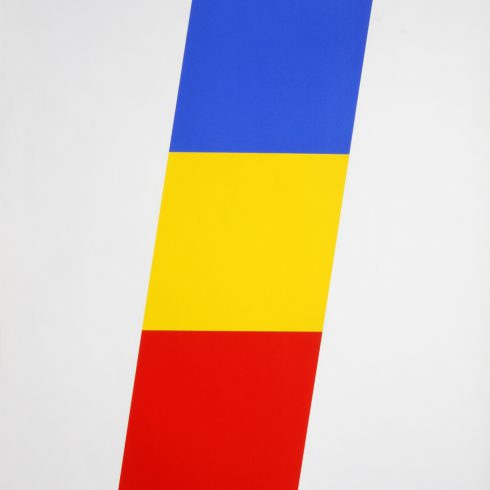