Serge Poliakoff was a Russian artist associated with the School of Paris and the abstract movements of postwar Europe. Employing patches of bold color within non-representational composition, Poliakoff’s paintings are characterized by their interlocking jigsaw arrangements. “The painting should be monumental,” the artist once stated. “That is to say, larger than its dimensions.” Born on January 8, 1900 in Moscow, Russia, the young artist fled the Russian Revolution in 1917 and settled in Paris in 1923 after living in Constantinople. He studied painting at the Académie Forchot and Académie de la Grande Chaumière, but it was not until 1935, while attending the Slade School of Art in London, that he discovered the abstract works of Wassily Kandinsky and Sonia Delaunay. These two artist’s works had a profound impact on Poliakoff’s understanding of color and the works he made throughout the rest of his career. The artist died on October 12, 1969 in Paris, France. In 2015, Timothy Taylor Gallery in London held the show Serge Poliakoff: Silent Paintings, which opened to critical acclaim. Today, his works are held in the collections of The Museum of Modern Art in New York, the Tate Gallery in London, the Malmö Konsthall in Sweden, and the Hirshhorn Museum and Sculpture Garden in Washington, D.C., among others. 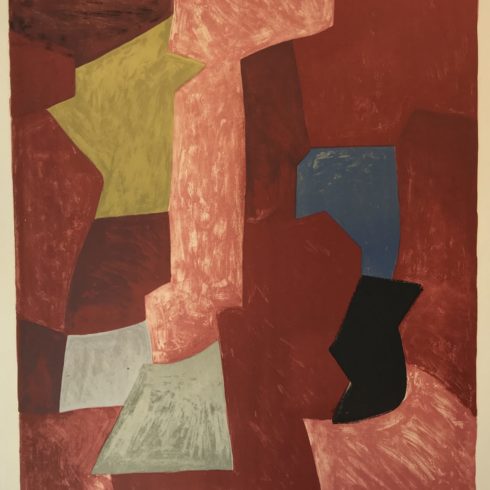