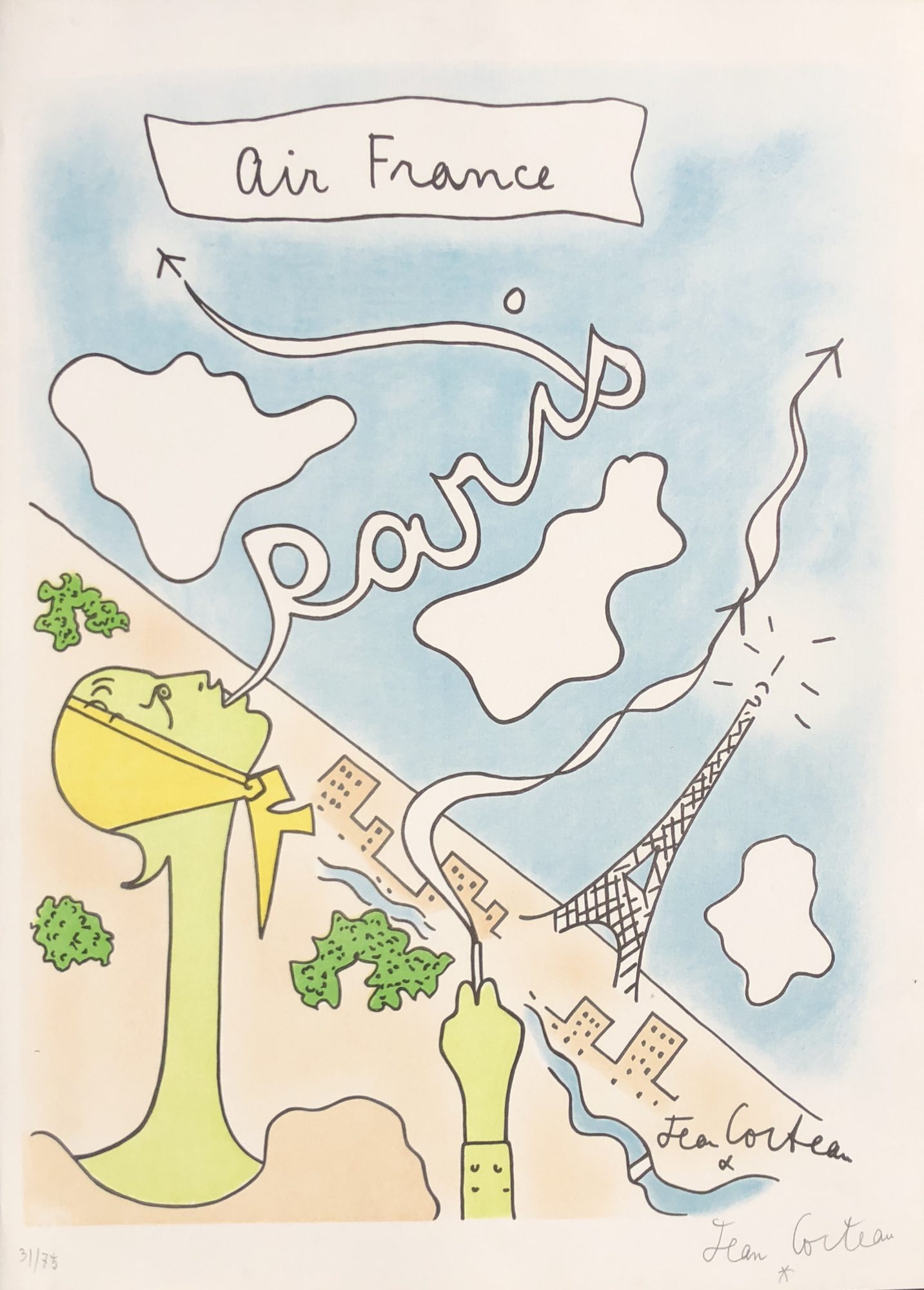 Jean Cocteau, Air France is a Lithograph print from the edition of 75. This print is signed at the lower right corner and numbered at lower left corner. Jean Cocteau, Air France features a sense of France with a female figure blowing smoke to make the words “Paris”, and the Eiffel Tower in the background in a light and pale tone.

Jean Cocteau was an enormously influential French artist and writer known as one of the major figures of Dada and Surrealism. With an oeuvre that spanned painting, novels, poetry, plays, and films, Cocteau established himself as a leading creative force in Paris. A regular member of the avant-garde, he maintained long-term friendships with artists such as Pablo Picasso, Tristan Tzara, Francis Picabia, and Man Ray. “The job of the poet (a job which can’t be learned) consists of placing those objects of the visible world which have become invisible due to the glue of habit, in an unusual position which strikes the soul and gives them a tragic force,” he once mused. Born on July 5, 1889 in Maisons-Laffitte, France, the self-taught Cocteau would regularly draw his friends and acquaintances in a distinctive, fluid style informed by his interests in Cubism, psychoanalysis, and Catholicism. “Poets don’t draw,” he once quipped about his artworks. “They unravel their handwriting and then tie it up again, but differently.” Among his best-known works is the novel Les Enfants Terribles (1929) and his critically acclaimed films le Sang d’un poète (Blood of a Poet) (1930), La Belle et la Bête (Beauty and the Beast) (1946), and Orphée (Orpheus) (1949). Cocteau died on October 11, 1963 at the age of 74 in Milly-la-Foret, France. Today, his works are included in the collections of The Museum of Modern Art in New York, the National Gallery of Art in Washington, D.C., and the Courtauld Institute of Art in London, among others.

Jean Cocteau, Air France is a Lithograph print from the edition of 75. This print is signed at the lower right corner and numbered at lower left corner. Jean Cocteau, Air France features a sense of France with a female figure blowing smoke to make the words “Paris”, and the Eiffel Tower in the background in a light and pale tone.

Cocteau’s activities of the 1920s were remarkably varied. He composed opera libretti for several composers. He published collections of poetry and illustrations as well as a novel inspired by his experiences during World War I. He staged a ballet called Le Boeuf Sur le Toit (The Ox on the Roof) and directed modern adaptations of several classic dramas. He promoted the work of young writer Raymond Radiguet, with whom he fell in love. When Radiguet died of typhoid fever, Cocteau was despondent and tried to console himself by taking opium.

Evaluations of Cocteau’s career note the variety of his work and his prolific creation. Bishop wrote: “Cocteau’s output is staggering in quantity and diversity, encompassing novels, plays, poems, films, essays, autobiographical writings, journalism, painting, and a voluminous correspondence. Much of this oeuvre is minor and some is frankly bad, but enough of it is outstanding, either intrinsically or as pure invention. … His failures do not diminish his major accomplishments.” “One overlooks a lot in the case of Cocteau,” Artner stated, “from narcissism and opium addiction to some less than sterling behavior during the Occupation. One overlooks it because he worked so very hard at becoming a poet and achieved it so irresistibly in film and in the ballet theater.” Bree, writing in Contemporary Literature, called Cocteau “one of the most versatile and talented personalities France has produced in our own time, a poet, essayist, novelist, playwright, film-maker, draftsman, and animator whose accomplishments have yet to be assessed.”

Jean Cocteau – Profile of a Boy 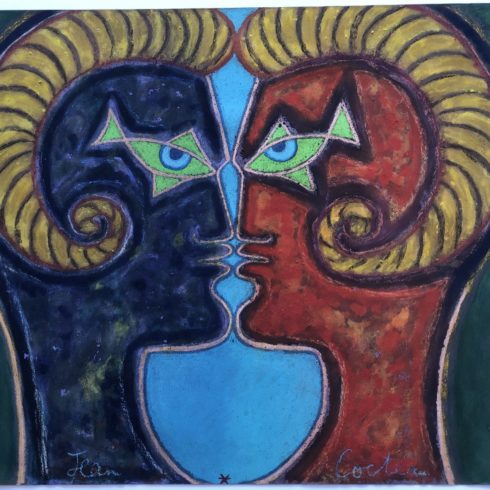 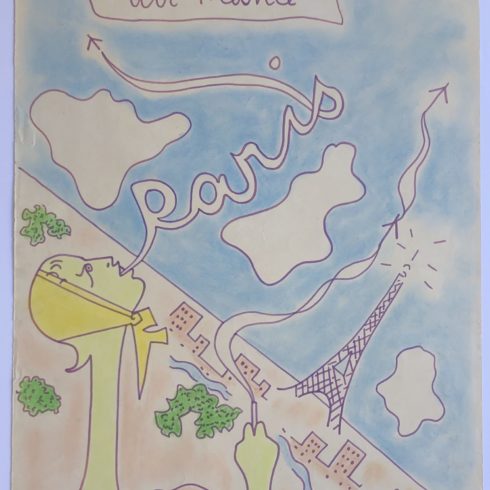 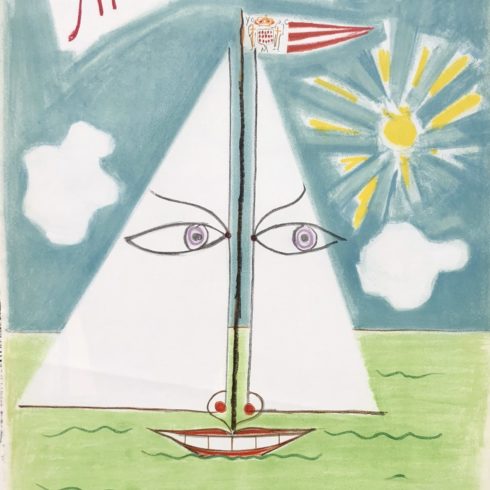 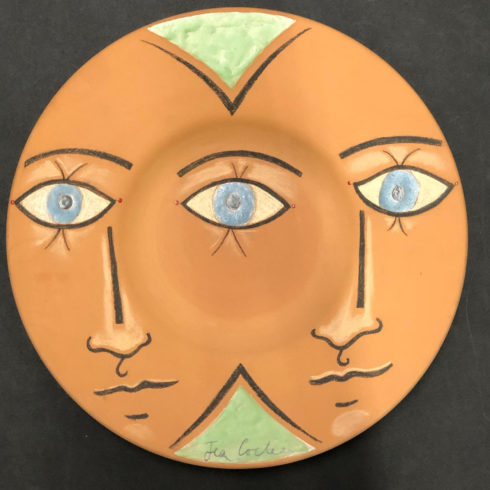 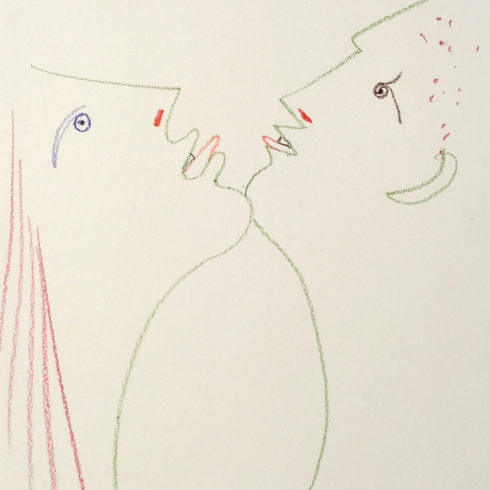 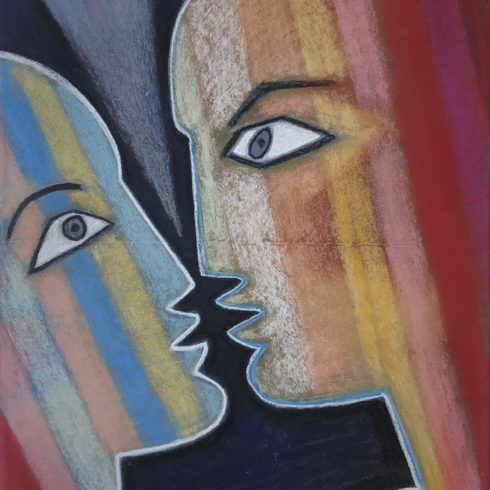